So CHz thought it would be clever to get up all in my grill/step on my turf by talking about S.S.H.'s original work, while still including enough info about him in his writeup that a second entry would be practically pointless.

But I'm not going to let him stop me. No sir, not today. I'll post about S.S. flippin' H. whenever I durn well please. And now with that out of the way, onto actual content...

Here we see the S.S.H. in his natural habitat of ROCK'N. The S.S.H.'s sound is very distinct, with complex sequenced electric guitar and synth "wank" a common identifier in the species. Anyone who's heard the S.S.H. could most likely spot it from an arbitrary number of miles away. Here we see one of the most famous specimens:

Okay, so silly nature show parodies aside, suffice it to say S.S.H.'s style is fairly distinguishable. However, it's also...shall we say...consistent, perhaps to a fault. To give an analogy, you could call S.S.H. the DragonForce of doujin. That is to say, it's definitely awesome for rocking out to when you're in the mood, but after a while it starts to wear on you, and you begin to notice the structure and instrumentation of his songs becoming predictable and formulaic, despite the impressive variety in source material from classic favorites such as Castlevania and Final Fantasy to slightly more obscure titles like Shin Megami Tensei and Super Robot Wars.

Of course, there are exceptions, such as these poignant arrangements: 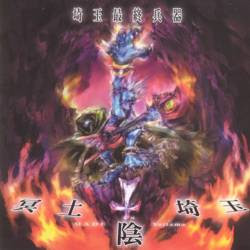 S.S.H. has (at least to my knowledge) released only one solo video game album, entitled "Underworld Shade Saitama," which is by now undoubtedly available only on Japanese auction sites. No need to despair however, as most of his work is still available on his site.

As to his current whereabouts, unfortunately I must admit I'm completely in the dark on that subject. But hopefully he'll resurface again someday and give all us doujin fans another big dose of ROCK'N.

Hey, congrats on your first post, big guy. Hopefully it'll be the first of many! :D