Sephfire interviewed re: Shadow of the Colossus by Tales of Shadows

After I read Alex Rowe's interview with SGX over at Tales of Shadows, I let him know that he should talk with other OC ReMixer fans of Fumito Ueda's games, including Sephfire and Binster. But before Alex ever heard from me, he already had his plans in motion to interview Daniel "Sephfire" Floyd. 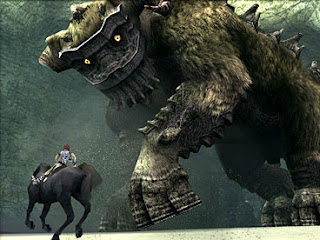 Released yesterday, the interview discusses Sephfire's plans to arrange material from Sony's recent blockbuster hit Shadow of the Colossus. Floyd's arrangement, entitled "Snowfall on Forbidden Lands," was also his first released collaboration with his wife Carrie "ceili" Floyd, which made for an excellent pairing, resulting in a whole that, in my opinion, was greater than the sum of its parts.

Floyd also provided background on how he got into video game music arrangement as well as his own take on the artistic merits of the Fumito Udea series of games. It's a quick but interesting read for fans of all types that you should check out. Let's hope Alex goes for the OCR trifecta down the line!

I have a couple of interviews planned, after those I'll turn to remixes again and try to approach Binster.

There's many other remixes I like but I don't post about, only because they're not ICO/SotC related.

Thanks for the link once again.