I haven't formally introduced Dwelling of Duels around here yet (of course, I have during my radio shows, but the blog is new territory). It's a usually monthly compo where artists are encouraged to predominantly perform the arrangement live, usually via live instruments rather than sequencing, gravitating toward rock. \m/

Every month at DoD features a different theme based around the world of gaming. Usually franchises, occasionally with broader concepts, always with cool customized game art (see below). Songs are released anonymously near the end of the month, accompanied by a listening party for community regulars. Voting takes place in the following days via a point spread of the voter's choice, and on the 1st of the new month the results are unveiled along with the new theme for next month.

So just a quick one with this past month's results, where anything from the Donkey Kong franchise of games was up for grabs. 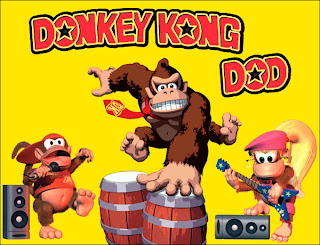 There are so many new faces that first come to light into the video game music arrangement community via The Shizz's Minibosses message board and Dwelling of Duels, so it's no surprise that a relative newcomer like Scared Sim was able to walk away with the gold, with an arrangement of Donkey Kong Country's "Aquatic Ambience" called "Swimming Monkey".

I'd include direct links, but then you wouldn't visit the actual site. Results follow below, and keep an eye out for DoD's current PC Month competition for the month of August :