You may have heard of The Black Mages. Formed in 2003 with, among other people, three Square Enix composers (including Nobuo Uematsu), TBM is the closest thing Square Enix has to an official band. Other game companies (especially during the 90's) have had bands featuring one or more in-house composer, like Konami's Kukeiha Club and Taito's Zuntata, but TBM is probably the most prominent modern example.

Live performances of VGM have been not necessarily commonplace in Japan, but certainly more frequent than in the United States and elsewhere. However, in the past few years, there have been an increasing number of video game concerts like PLAY! A Video Game Symphony and Video Games Live. So, I figured it might be kind of cool to look at other, earlier VGM performances, including those by in-house bands and those like VGL. I mentioned the S.S.T. Band in "Composer Spotlight #3: Koichi Namiki," so that's as good a place to start as any.

The S.S.T. Band was one of the first, possibly the first, official developer band, starting way back in 1988. "S.S.T." stood for "Sega Sound Team," befitting the fact that, of the six original members, three were Sega composers (Hiroshi Miyauchi, Jouji Iijima, and Koichi Namiki). A fourth member, Kimitaka Matsumae, would later become a Sega composer, as well as would two future band members who were not part of the original lineup, Hisanori Kumamaru and Takenobu Mitsuyoshi.

I was going to make an info file about the S.S.T. Band's members, discography, etc., but their Wikipedia article is very thorough, probably more thorough than anything I would have written, so I'll pimp that out instead. The only full arrangement albums are MEGA SELECTION I & II and BACK IN THE S.S.T. BAND!!; all of the others contain both arrangements by the S.S.T. Band and original soundtracks. 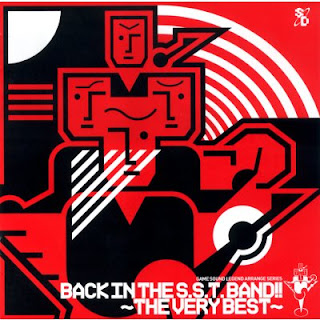 An interesting thing to note is that every single S.S.T. Band member had a stage name, most of which were taken from Sega arcade games:

But the best part of the S.S.T. Band, even moreso than their rockin' arrangements, is their appearance. Remember when sleeveless vests, ponytails, bandanas, and sunglasses used to be cool on musicians?

The band's arrangements always strayed close to the original, usually being covers with the occasional solo thrown in to retain the feel of the originals, all of which were from Sega arcade, Master System, or Genesis games. Since the band's instruments were guitars, keyboard, and drums, they usually picked upbeat songs that could easily be converted to synthrock, like the title theme from After Burner seen above. However, as the material dictated, they were not above slower, jazzier pieces like their medley of Galaxy Force tracks and ballads like their cover of "Last Wave," the high scores theme from OutRun.

Other videos from their 1990 concert on YouTube are "Magical Sound Shower" from OutRun and an After Burner medley featuring other tracks from the game other than the title track. One last video, from no concert I can identify, is a cover of "Like the Wind" from Power Drift. Soak up the retro.

Okey first, they are sooo cool XD
second, KIMITAKA MATSUMAE IS THE BEST COMPOSER EVER! Listen to jade cocoon damnit!
I like it how he played the xylophone part as that is his trademark sound in the jade cocoon soundtrack along with strange pads. :)