I first met Maximo V. Lorenzo at MAGFest 5 this past January. I was hoping to sell OC ReMix t-shirts in the game room, and Mustin was nice enough to give me some room next to him as he sold CDs from OneUp Studios and others. The most cringe-worthy moment we had was when a fan of OneUp Studios came by to talk, and praised Mustin, but subsequently mentioned that he had obtained all of OneUp Studios' albums illegally. When the guy left, Mustin said under his breath something to the effect of "Yeah, thanks a lot buddy." Then we laughed at how the guy had the sheer nerve to actually tell him he stole the albums. Oy!

Sitting on my right though was this artist with a killer portfolio. Tons of original artwork as well as excellent stuff from the worlds of manga, anime, comics and video games. We got to talking, and he showed me some cool art of his, including his take on the characters of Mother 3. He also had a REALLY badass black & white Hellboy print that just caught my eye and I knew I had to part with my money. I promised him I'd hit the ATM and be sure to make the purchase. None of this "Yeah, I'll buy something maybe" BS. A couple of bucks later and I was the proud owner of a fine piece of art.

But in the time since I met Maximo at MAGFest, he's since helped Mustin by providing some cool art for OneUp Studios' free web releases, with one piece done for Mustin's tracks, as well as a pair done for the OUS EP's Club Game Music and the swanky Bad Dudes. 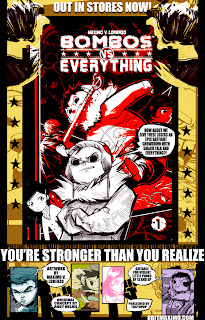 But now, he's got a much bigger milestone realized with the release of his first full professional work via Tokyopop entitled Bombos vs. Everything. It's been in the works for a long time, and you can pick it up at fine bookstores everywhere. (I'm partial to Borders, as I used to work there and their customer service policies are better.) If you're a fan of manga and anime (hey, who knows; enough support could eventually get the property picked up by an animation studio), definitely get a hold of Bombos vs. Everything, pimp it to friends and get the word out. Max'll be glad you did.

I'm the giant bespectacled eye on the Bad Dudes cover!

Hey Maximo here! thanks for featuring me man, I'm honored!

( I didn't quite GRADUATE joe kubert, but i have had my schooling!)

Anyway may the Bad dudes, and Mustin live on forever!

Nice post. But if you link to me, link over to http://www.myspace.com/mustinmusic

Good story, though. And nice post on the Maximo. He's the best!