"Into the Score" podcast blends VGM with academia

In my regular perusal of the various blog trackers, I came across one blog/podcast yesterday that was very unique, so I was surprised that I hadn't heard of it before. Kenley "siven7" Kristofferson's Into the Score is dubbed "the only podcast devoted to the academic study of video game music," which is a hell of a format and one worth checking out as soon as possible.

In the second part of Into the Score's tenth episode (entitled "...to the Orchestra!"), Kenley gives a great overview of arranger Jeremy Robson and Robson's Final Fantasy VII "Philharmonic Suite", the first and fifth parts of which are hosted at OverClocked ReMix. Included are a rundown of Robson's musical influences, a reading of djpretzel's writeup for the first movement at OCR, and complete playthroughs of all five movements in the suite. 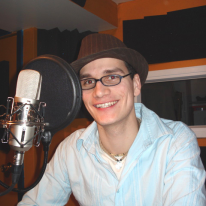 Kenley's a little rough on the delivery but no more so than me during my time with college radio, plus he's got great energy, an earnest respect for video game music, and genuine knowledge about the technicalities and structure of music. He also claims to play a mean euphonium, having studied at the University of Manitoba. And he sounds like a nice guy. If you've heard Mazedude's voice before, this guy is just as good natured. (Ironically, he also looks like Makke.) He's got a good voice, and, with more poise on his delivery, could quickly be mistaken for someone on NPR or XM Classics.

For those that aren't into music theory discussions or referencing the roots of classical music, Into the Score's subject matter may feel difficult to access, at least for a bum such as myself. But whatever subject matter goes over my head pales in comparison to the enjoyment of what does remain accessible to me, that being a sincere appreciation of the medium of video game music. New episodes of the show come out infrequently enough that one can't set their watch to it, which impedes the building of a large audience. But don't sleep on Into the Score and this podcast's unique and enlightening format; you may just learn something. Give it that look.

Even with the flubs, I still think it sounds more professional than your show. :D

new episode in about 2 weeks (took most of August off to finish up a composing contract and to get ready to teach high school band in September!)... Mega Man 3 and we're taking a look at the practice of the video game cover band! Spread the word!

PS: Your blog is fantastic - I've downloaded google reader just to follow your blog! Keep up the amazing work!